\Blue Moon could take astronauts to the moon in 2024😙!

The private spaceflight company Blue Origin and Amazon founder Jeff Bezos, unveiled on yesterday (2019 May 9) a new biggest moon lander called Blue Moon, along with a smaller rover at the Washington Convention Center.

“This is an incredible vehicle, and it’s going to the moon,” Blue Origin founder and CEO Jeff Bezos said at a press event at the Walter E. Washington Convention Center in Washington DC, where he stood in front of the hulking new lunar lander on stage. 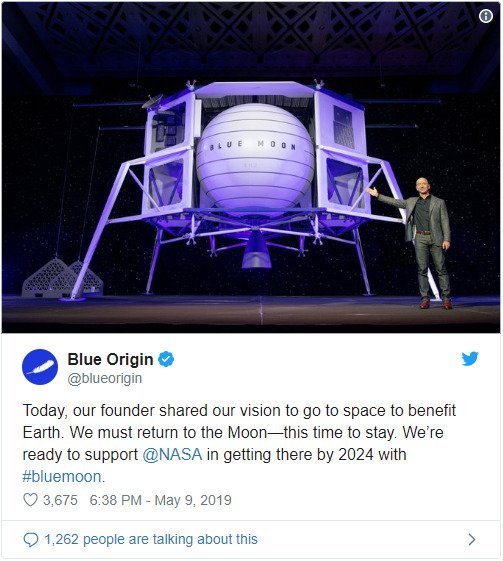 The world richest person Jeff Bezos said, The Blue Moon is designed to carry rovers and other large payloads to the lunar surface and it could also take astronauts to the moon. To modify Blue Moon for crewed spaceflight, the company would top the spacecraft with an attachable, pressurized ascent vehicle.

Jeff Bezos said, Before carrying astronauts to the moon, Blue Origin would first test it lunar lander “Blue Moon” with an uncrewed mission.

While Bezos did not explicitly state that Blue Origin plans to offer its new vehicle to NASA for the agency’s ambitious push to land American astronauts on the moon in 2024, a newly posted description on the company’s website that “Blue Moon is a flexible lander delivering a wide variety of small, medium and large payloads to the lunar surface. Its capability to provide precise and soft landings will enable a sustained human presence on the Moon.”

NASA has not yet selected a lander for that historic trip, so Blue Moon may be a contender. Just last month, Lockheed Martin revealed its proposed plans to build a lunar lander. Lockheed’s lander (which has yet to receive a proper name) would be part of the company’s “early Gateway” infrastructure for a sustainable human presence on the moon.

Whether NASA astronauts can really make it to the moon by 2024 is still a subject of debate, but a few things are certain: private companies and other space agencies around the world are gearing up for a new wave of lunar exploration, and Blue Origin has entered the new moon race.

I think we are much closer to interplanetary space travel than ever before. Jeff Bezos isn’t the only billionaire that have space dreams. Elon Musk’s private space organizations SpaceX are also testing out space vehicles such as the Starship and Super Heavy that can safely transport humans to Mars and what do you think about Biggest Lunar Lander Blue Moon? share your opinion in our comment box below.

We have something new for you, Sciencenews18 has a new feature of WhatsApp now, where you can get the latest breaking news update and a special offer to earn money on your WhatsApp.