After landing on the Moon’s surface, the rover will emerge from it and perform different experiments and collect scientific information on lunar topography, mineralogy, elemental abundance, lunar exosphere and signatures of hydroxyl and water-ice. ISRO hopes that Chandrayaan 2 of India will touchdown the moon on 6th September of this year 2019.

Let me tell you that it was not launched because some tests of Chandrayaan-2 did not get complete. Rover and landers were not there with India’s first Chandrayaan. This time they have also been made part of the Second lunar mission Chandrayaan-2. ISRO had announced the launch of Chandrayaan-2 in 2017 and then in 2018, but it was not possible. ISRO Director Kailasavadivoo Sivan recently said that ISRO will now make every effort to launch it soon. 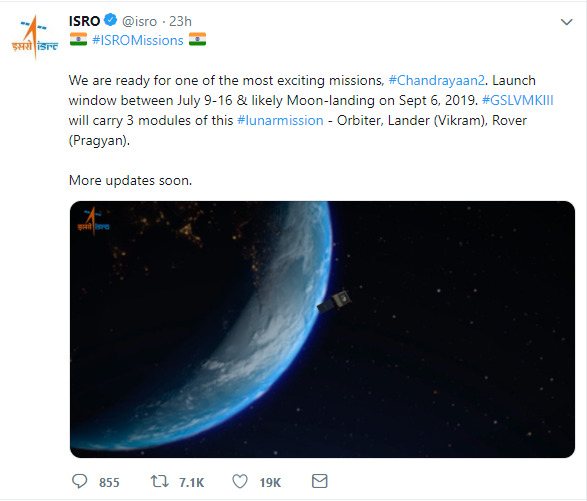 What will special in Chandrayaan-2?

The Chandrayaan-2 weighs around 3,290 kg. After entering the Moon’s orbit, its orbiter will separate from the lander. After this, the lender will be down on the Moon surface and then the rover will separate from it. The orbiter will be equipped with many sensitive devices, cameras, and sensors. Similarly, the six-wheeled Rover will “move around the landing site in semi-autonomous mode as decided by the ground commands. The instruments on the rover will observe the lunar surface and they both send back data to ISRO, which will be useful for analysis of the lunar soil

ISRO says that lander will be land in Moon’s South Pole and ISRO have been selected Two locations for landing. One of these places will be finalized soon. At this time there is no any country have landed on these locations. According to ISRO, the South Poll landing is soft and there will be no problem in moving the rover.

So, All the best to ISRO and you share your opinion about Chandrayaan-2 in our comment box below, you can also subscribe us to our newsletter for more related content.
And most important, Sciencenews18 has a new feature of WhatsApp now, where you can get the latest breaking news update and a special offer to earn money on your WhatsApp.